MONTICELLO –– Sometimes, a game has it all. The back and forth shooting, costly turnovers, frustrating fouls, clock management and unlikely heroics culminated on Tuesday night in an … 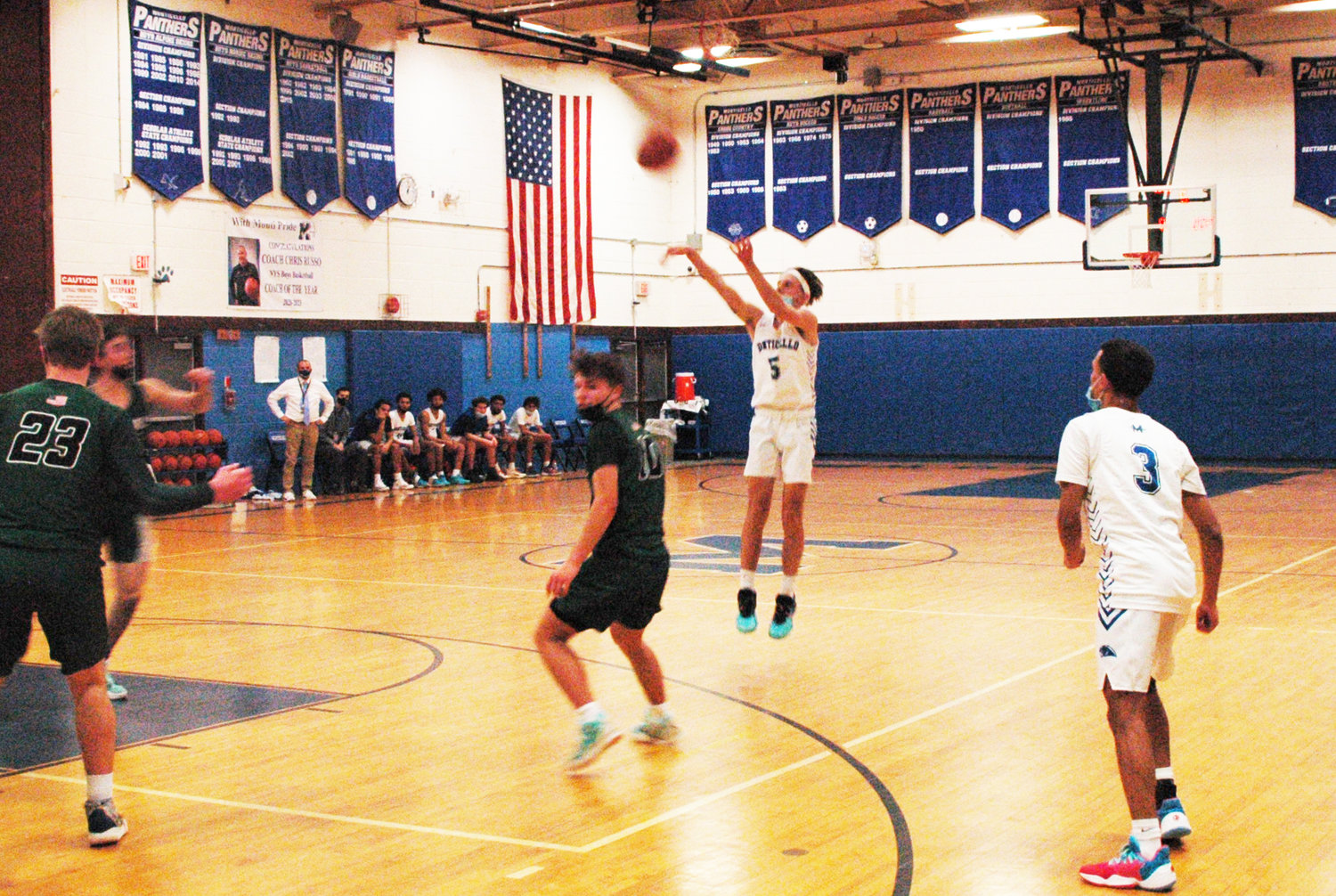 Joseph Russo scored 14 points in the league win over Cornwall. Russo took over at point guard after Rodriguez left the game due to an injury.
Anthony Morgano | Democrat 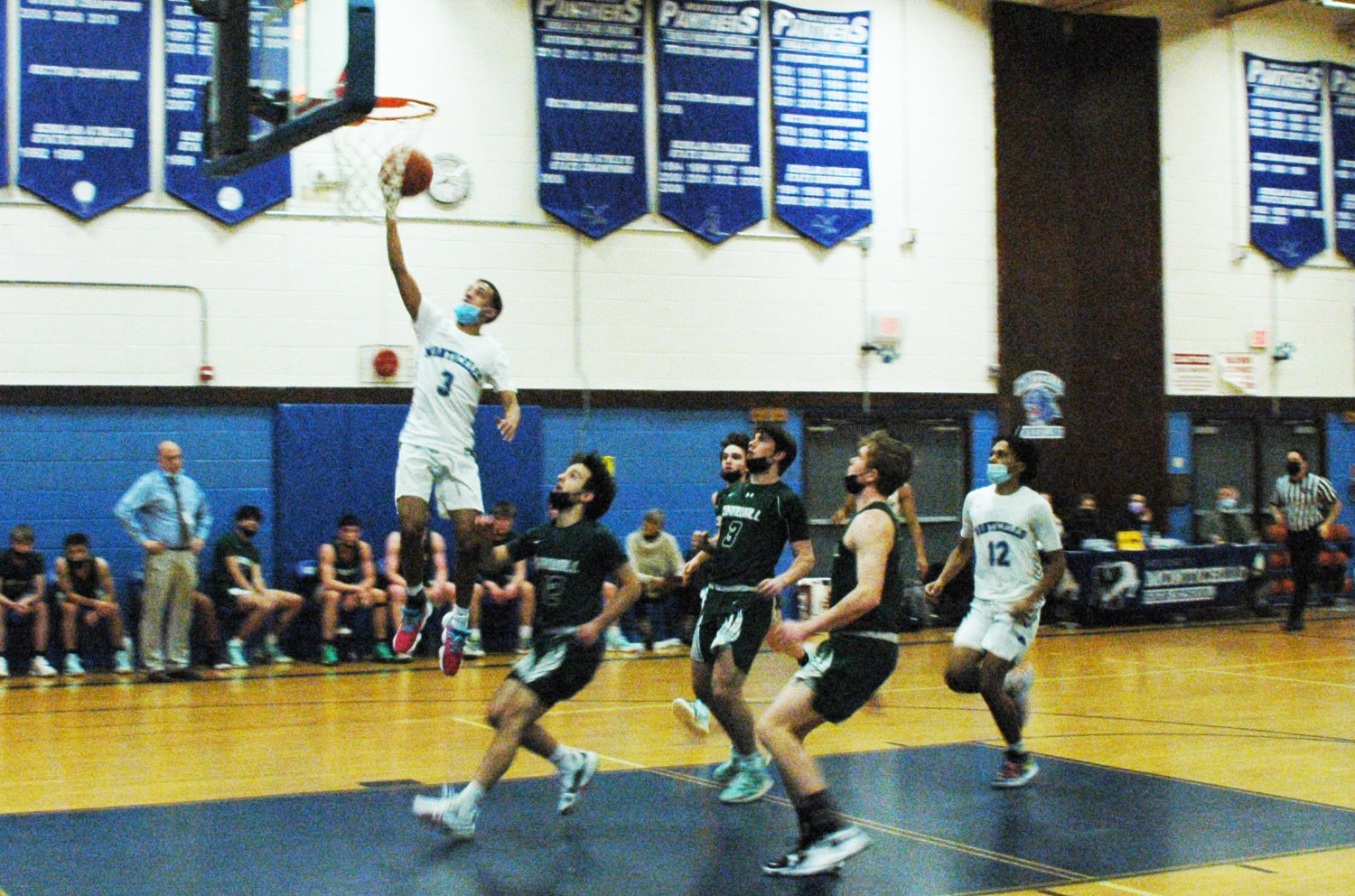 Pedro Rodriguez breaks away for a layup against Cornwall. Rodriguez had 17 points on the night, including a crucial go-ahead three-point play to secure the victory.
Anthony Morgano | Democrat
Previous Next
Posted Friday, February 4, 2022 6:20 am
Anthony Morgano

MONTICELLO –– Sometimes, a game has it all. The back and forth shooting, costly turnovers, frustrating fouls, clock management and unlikely heroics culminated on Tuesday night in an instant classic between Monticello and Cornwall. Monticello trailed all night, but when it mattered the most, Pedro Rodriguez floated a game-winning layup, which turned into a 3-point play and the Panthers won 59-57.

Chris Russo was pleased with his team’s performance and ability to step up. “We were down almost all night, but the kids showed resiliance tonight and everyone stepped up. I couldn’t be more proud of them.”

Cornwall deployed a press from the opening possession of the game until late in the fourth quarter, and it stymied the Monticello offense a handful of times. However, for every forced turnover that the Dragons got, they seemed to lose as many by traveling calls beyond the arc. Their shooters would adjust their footing before putting the ball down and the violations led to many turnovers. The traveling issues plagued Cornwall throughout the night, and a late traveling violation with 1.7 seconds left deprived them of the chance to send the game to overtime.

Chris Russo and the Panthers adjusted to the way the game was being called, helping them secure the league victory. “The referees work hard and they do their best when calling the game. It is out of our control, but the kids responded well and were able to adjust to things.”

Monticello trailed at the end of each of the first three quarters, and though they tied Cornwall a handful of times throughout the night, were always trailing until the 3:27 mark of the fourth quarter. Pedro Rodriguez scored two of his 17 points on a lay-up but collided with a defender and had to come out of the game. At that point, Monticello led 48-46, and had to hold the lead. The Panthers forced an empty possession by the Dragons and scored again to make it 50-46, but that lead was quickly erased by a 4-0 run by Cornwall.

Tied at 50, the two teams exchanged the lead six times in those final three minutes. Rodriguez returned to the game with 17.9 seconds left and the Panthers trailing by one point. The Panthers were forced to foul Cornwall and set them up at the charity stripe with a chance to extend the lead to three. After Cornwall missed the free throw, Monticello raced down to the other end and Pedro Rodriguez was fouled on the lay-up with 9.9 seconds left. With the 58-57 lead, and a free throw coming up, the gym was electrified. The crowd was buzzing as Rodriguez knocked down the extra point to give the Panthers a two point lead.

Cornwall rushed the ball up the court and got it down low for an easy layup to tie the game, but a travel gave the Panthers the ball back with 1.7 seconds left. After an inbounds pass that was nearly intercepted, the buzzer sounded and the Panthers celebrated their victory.

Monticello’s season has been an interesting one, to say the least. After struggling to close out games in the early going, the team has improved to turn those last-minute losses into wins.

“I have been telling the guys all season long that we will be playing in close games and that the lessons we take from each game will only help us down the road,” Russo explained. “The guys have really bought in to our defensive mindset and value the team’s success over the individual accolades. Winning doesn’t just happen by chance, so taking the lessons from previous games and applying what we work on in practice has been key for us.”