FALLSBURG – While the postseason is always the ultimate goal, it is not uncommon for teams to set benchmarks for themselves. This goal-setting in the first weeks of the year set the tone. … 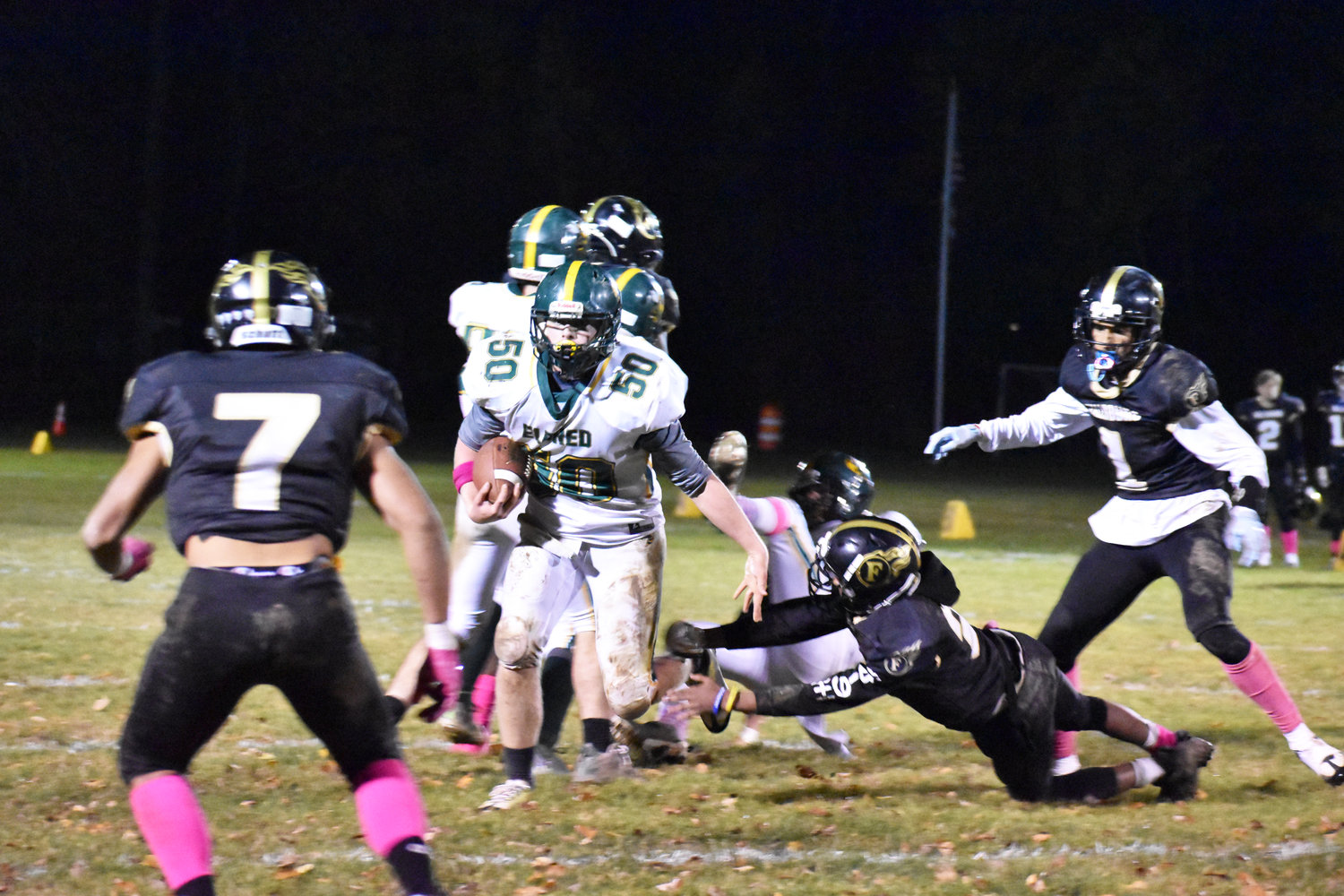 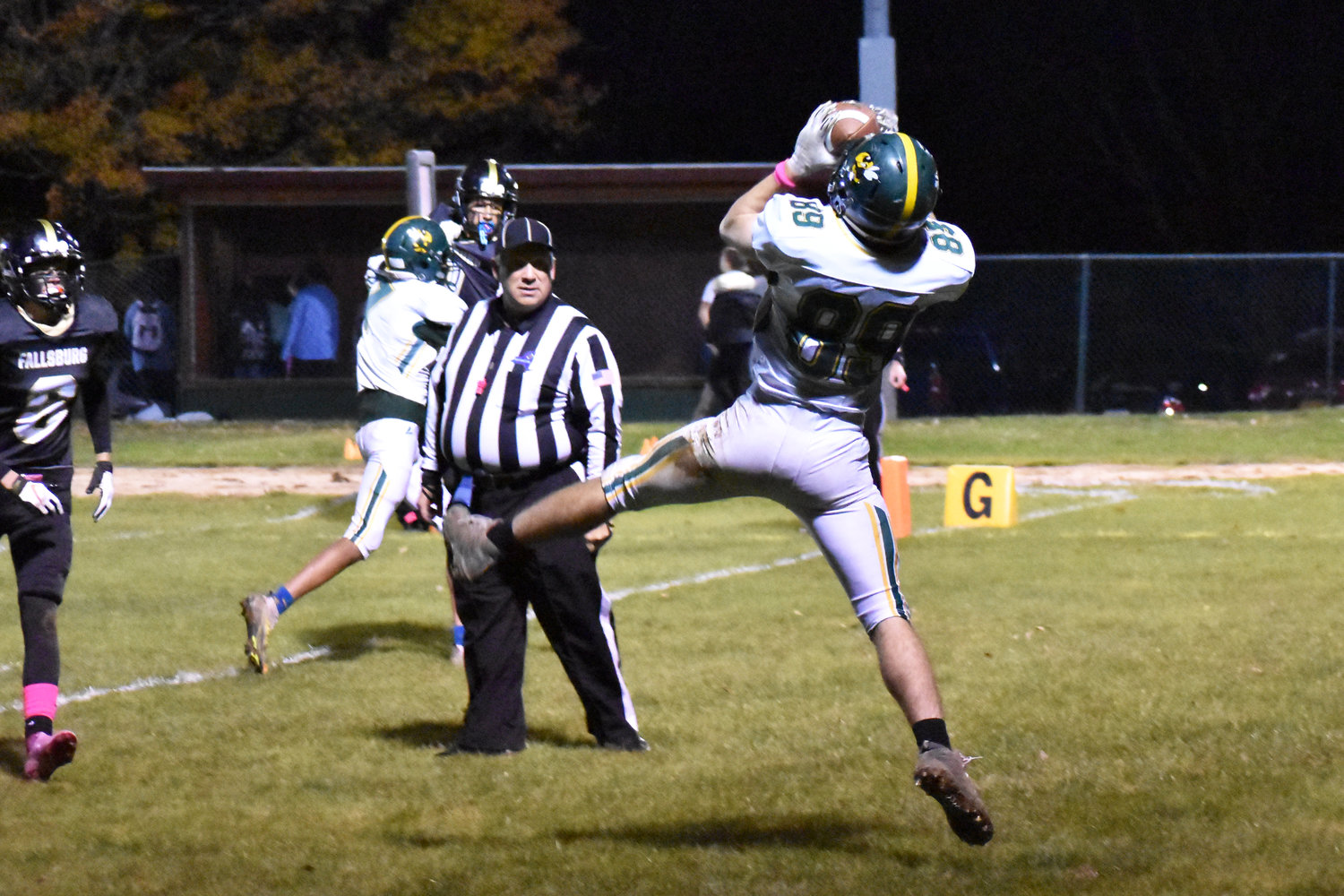 FALLSBURG – While the postseason is always the ultimate goal, it is not uncommon for teams to set benchmarks for themselves. This goal-setting in the first weeks of the year set the tone. Eldred and Fallsburg both found some success in their respective seasons, but also dealt with injuries that made their attempted postseason runs much more difficult.

When the two teams met on Friday night, neither had a shot at the playoffs after each losing to Tri-Valley, Sullivan West and Ellenville. On the line, however, was bragging rights and the chance to get back to .500 after both teams started the season 2-3.

After a first half deadlock between the two teams, Eldred’s third quarter gave the Yellowjackets a huge cushion entering the 4th and allowed them to hang on for the 54-33 victory.

In the first half, the battle for fourth place felt more like the battle for first. Both teams exchanged punts to start as they were figuring each other out, but Fallsburg scored on their next drive to take a 7-0 lead.

On Eldred’s next drive, backed up in their own territory on 4th and long, elected to punt. After a bad snap, Eldred’s punter grabbed the ball and turned the corner, running upfield for a huge gain and a first down. On the next play, Frankie Whitmore reached the end zone for his first touchdown of the day. After converting the 2-point conversion the Yellowjackets took an 8-7 lead.

After forcing a fumble on the ensuing kickoff, Eldred took the ball into the end zone at the end of the first quarter to increase their lead to 16-7.

On the next drive, Mateo Scanna connected with Isaiah Young for a Comets’ touchdown. It was 16-15 with a lot of time left in the first half.

Eldred’s Frankie Whitmore found the end zone for the second time, rushing past the pylons and increasing the Eldred lead back to nine after the 2-point conversion.

Trailing 24-15 with time winding down in the first half, Fallsburg found the end zone once more before the break. They were unable to convert the 2-point conversion and entered halftime trailing by 3 after a near touchdown by Eldred at halftime.

Unfortunately for Fallsburg, Eldred came out of the break firing on all cylinders. After receiving the second half kickoff, Eldred marched down the field on the legs of Frankie Whitmore and the QB option run. Whitmore found the end zone and increased the Eldred lead to 30-21.

On Fallsburg’s first play from scimmage in the third quarter after the next kickoff, Eldred’s secondary picked off a pass over the middle intended for Young.

Ethan Williams, who also totaled two touchdowns on the day, caught the interception for Eldred. After the pick, Eldred’s offense continued to march back towards the end zone, and Whitmore crossed the goal line for the score. After the conversion it was suddenly 38-21.

A perfectly placed squib kick on the ensuing kickoff was mishandled by Fallsburg and Eldred recovered and started with great field possession.

Whitmore raced into the end zone for the fifth time of the game, and the third in the quarter to extend the lead to 46-21. Whitmore rushed for 254 yards and threw for an additional 100 in the game. At the beginning of the third quarter, it was a 24-21 battle. By the end of the quarter, Eldred had rushed for more touchdowns than Fallsburg had run offensive plays.

The dominating quarter by Eldred proved insurmountable for the Comets, who scored twice more in the fourth quarter, both Comets’ touchdowns by Isaiah Young.

Eldred scored again in the fourth, but the game was basically out of reach at that point, and it moved the score to the 54-33 final.

“If we didn’t have the third quarter that we had, Fallsburg beats us,” Coach Sean McAveney said after the game. “Fallsburg is a much improved team and they played well tonight.”

“Barone put all of this together, all of the building blocks. We’ve increased numbers and now we have to start building and have some success.”

“We’ve been working hard all year,” Coach Dom Scanna said after the loss. “We’ve had quite a few injuries and it has opened up a lot of positions for people to step up and play. We’re too good of a team not to be in the playoffs, but the injuries were tough this year."