BEAR MOUNTAIN – “The Bears went over the mountain and what do you think they saw?”

Answer: A history-making first place finish by Adam Furman (14:57.50) who notched the … 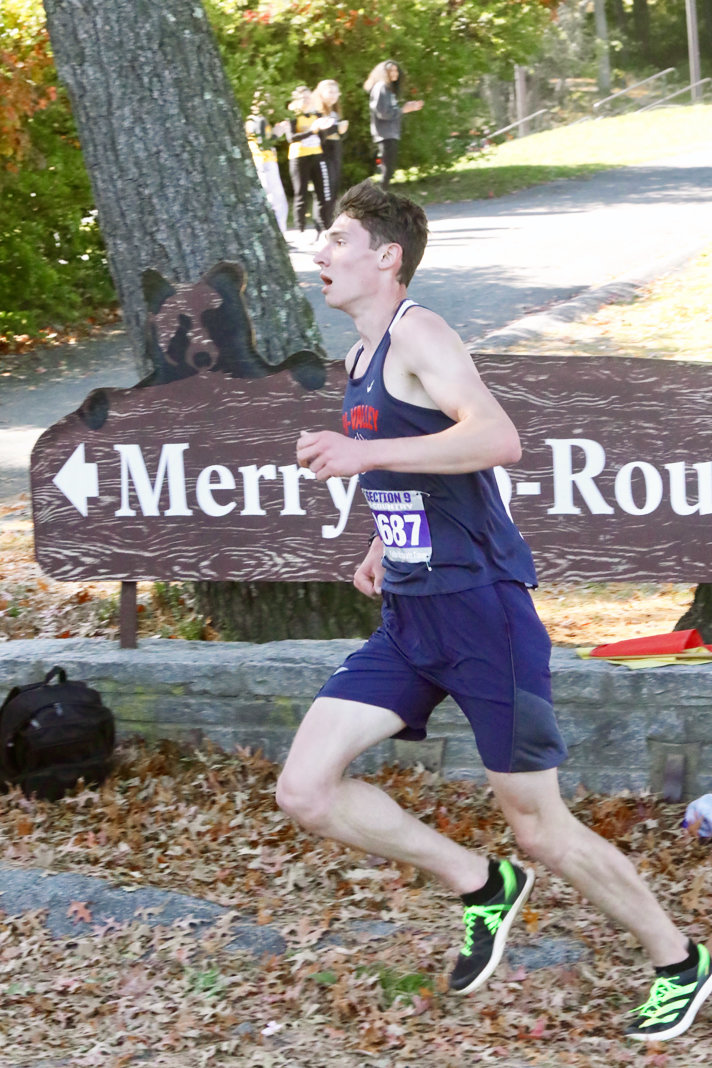 Race winner Adam Furman heads around the last leg of the OCIA Championships. His time of 14:57.50 was not only a school and county record, but the first sub-15-minute time at the race in the past 20 years.
Richard A. Ross | Democrat 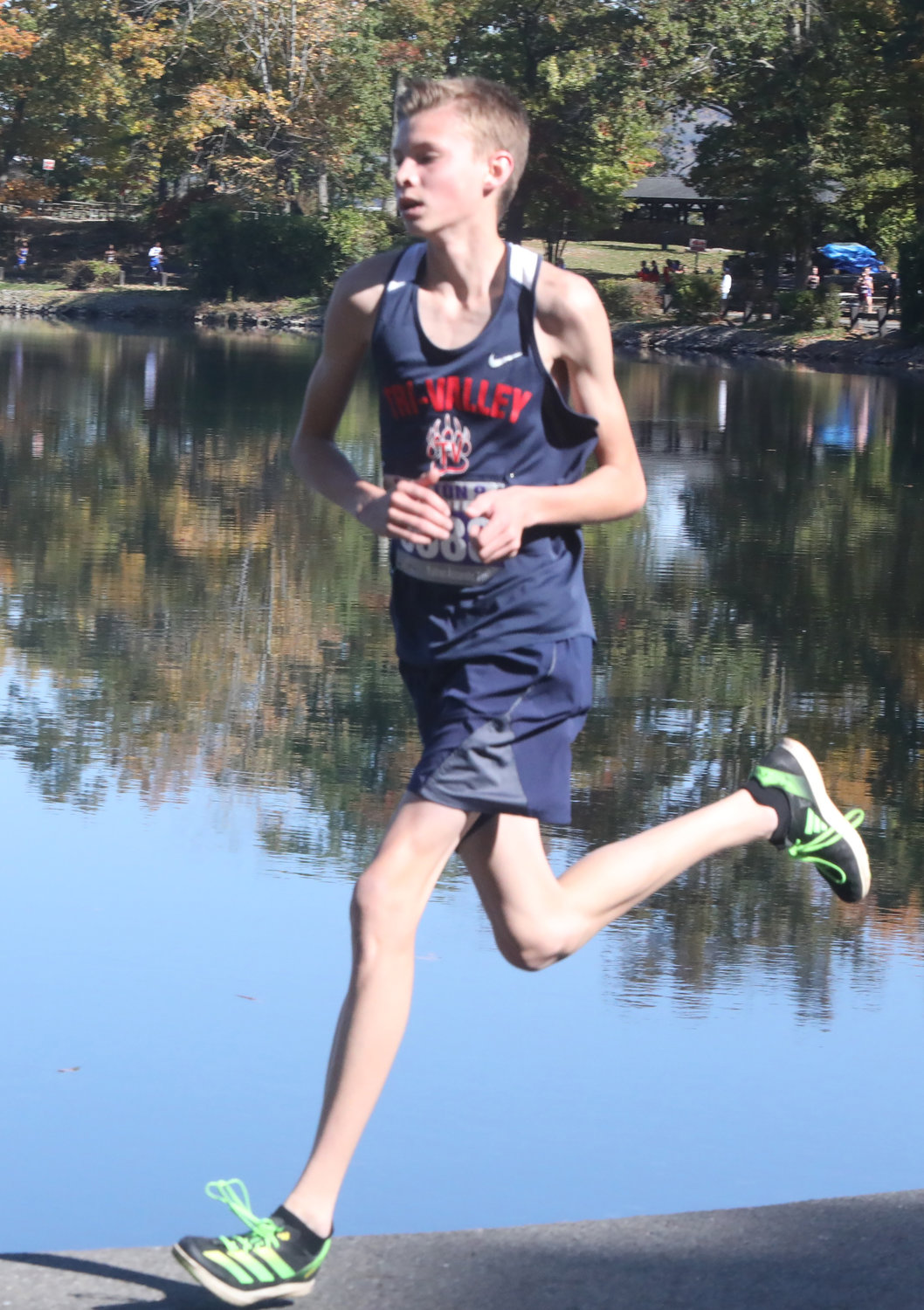 Tri-Valley sophomore Van Furman finished fourth in the race in a speedy 15:59.10. T-V as a team finished second to Monroe Woodbury out of the 25 schools in the field.
Richard A. Ross | Democrat 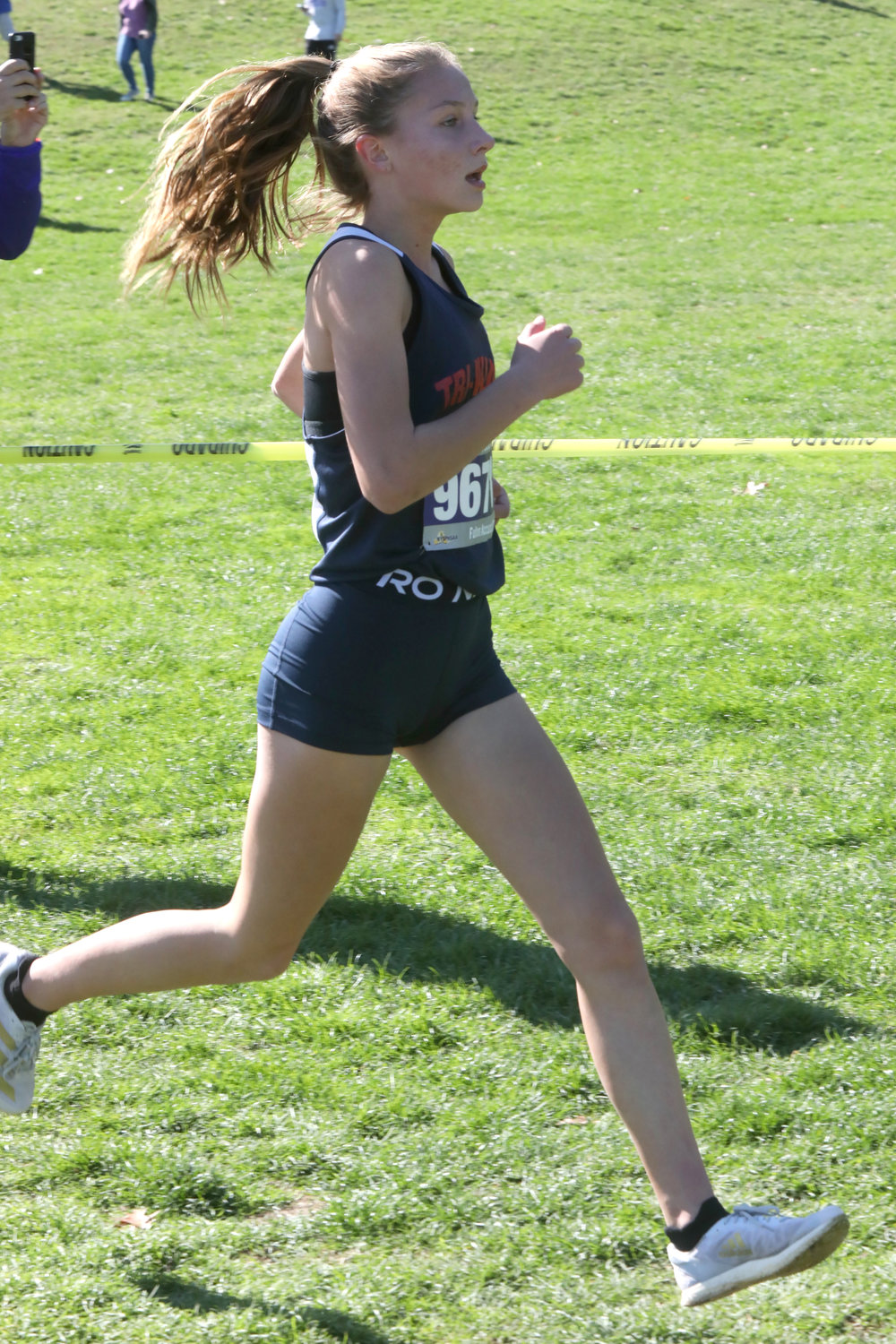 Completing the “Furman show”, T-V eighth grader Anna Furman bolted to third place in the girls race in an impressive18:41.40.
Richard A. Ross | Democrat
Previous Next
Posted Tuesday, October 25, 2022 6:30 am
Richard A. Ross

BEAR MOUNTAIN – “The Bears went over the mountain and what do you think they saw?”

Answer: A history-making first place finish by Adam Furman (14:57.50) who notched the first sub-15-minute time in the past 20 years of the OCIAA Championships. His school and county record time places him as the 17th fastest runner in the race’s history. And oh yes, it was his second straight victory in the event, the only Tri-Valley boy to have won it since the school joined the Orange County League.

Last year his winning time was 15:42.1. This time out Furman eclipsed Monroe-Woodbury’s Colin Gilstrap (15:01.10) and Collin Catherwood (15:11.20), two runners who tried in vain to catch him. M-W did win the team title with a combined scored of 24. But “rinky-dink” Tri-Valley, a nickname coined by former coach and AD Joe Iatauro, took second with a score of 71, finishing ahead of all other schools big and small.

Chip Furman, Adam’s dad and coach continues to be impressed by his son’s achievements. “Last week at Burnt Hills was the hardest I’ve ever seen him race.”

Adam was ecstatic: “I was so happy with my time, it’s one of the top times on this course. I was happy with my Burnt Hills performance but I’m even happier with this. I’m thinking I’ve got to be close to number one in the state.”

He is, now holding the fastest three-mile time in the Empire State and on track to attain his primary goal this fall, a state title not just for the team (again), but an individual crown to add to his treasure trove of medals, trophies, ribbons and smiles.

Adam wasn’t the only Bear beaming with pride. His younger brother Van, a sophomore finished fourth in the race in 15:59.10. At this stage of his growth spurt, Van still is developing the strength to propel him to a fast start. He was about 60th at the first turn of the cone but picked off runners with his quick turnover to capture fourth in the field of 135 runners. Van is eclipsing Adam’s times from his younger running days and next year when Adam has moved on, he will ascend even further when all the present seniors graduate.

The third Bear of note is Adam’s eighth grade sister Anna, who finished third in the girls race in 18:41.40. By far the most relaxed of the Furman trio, she runs for the sheer fun of it. Needless to say, there was no one close to race winner Karrie Baloga of Cornwall (16:33.40). Baloga is not only the top runner in NYS, but she is ranked second in the nation to Abbey Necklicki from Minnesota. The two will attend the University of Colorodo in the fall.

Furman’s coaches Tyler Eckhoff and Skylar Musa have no intention of heaping heavy workouts on her lest she becomes just another burnt out runner who was pushed too far and too fast.

Anna recapped the race: “In the beginning there were some other girls in front of me but once I reached the hill, I really pushed it. In the end it was worth it.”