SULLIVAN COUNTY – With big wins by Monticello, Sullivan West, Tri-Valley and Ellenville, Week 6 featured a handful of exciting matchups. With most of the Week 7 matchups tonight, featuring a … 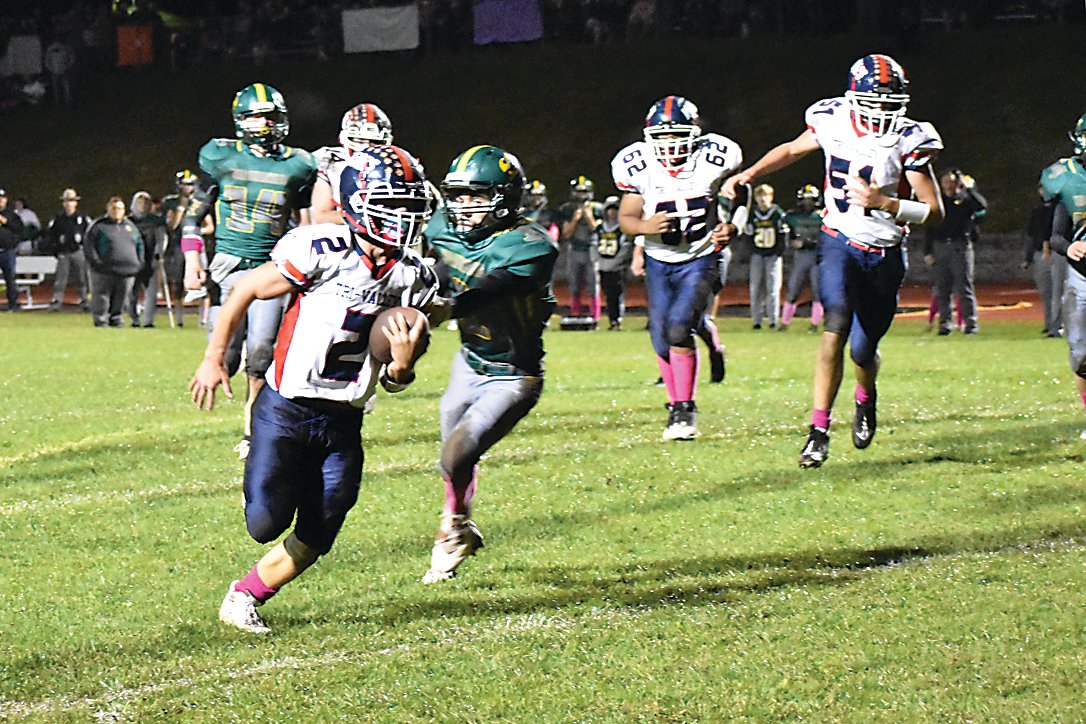 Austin Hartman and the Tri-Valley Bears are running into Lake Huntington tonight to take on the Sullivan West Bulldogs. At this point, both teams are undefeated in the division and the winner will take first place.
Anthony Morgano | Democrat
Posted Friday, October 21, 2022 6:30 am
Anthony Morgano

SULLIVAN COUNTY – With big wins by Monticello, Sullivan West, Tri-Valley and Ellenville, Week 6 featured a handful of exciting matchups. With most of the Week 7 matchups tonight, featuring a few key matchups, let’s take a look at what’s coming up in the final week of the regular season.

Fallsburg and Eldred both suffered tough losses in Week 6. While in a three-team tie with Ellenville last weekend, each had a chance to make the playoffs if they played their cards right.

Eldred lost their homecoming game 22-8 to the Tri-Valley Bears, a team that has dominated the division to this point.

Fallsburg, on the other hand, squared off against Ellenville, and the two teams battled to a 58-36 final in favor of the Blue Devils.

The Yellowjackets and the Comets have identical league records, and will square off in Morningside Park to carry bragging rights and a likely 4th place finish in the division into next season.

The annual battle of the Blue Devils is scheduled for tonight. Last year’s matchup featured two playoff teams, and the combination of Livingston Manor, Roscoe and Downsville’s stellar defense earned them a win over Ellenville. This year, the tables have turned, with Ellenville vying for another 3rd place finish and playoff berth, while Roscoe’s low numbers and mounting injuries have kept them out of the win column for the season thus far.

Both Fallsburg and Eldred will be rooting for Roscoe in this contest, because an Ellenville loss would open up a tie for 3rd place with the winner of the Comets and Yellowjackets contest.

Ellenville’s impressive 58 points scored last week was a stark contrast to their early season contests, including their near loss to Eldred.

Liberty is having a down year. Their offense has struggled to put many points up, scoring just 34 points thus far.

They will square off against the Rondout Valley Ganders tonight on the road, against a 2-7 team that has similarly been outscored by a large margin.

Home field advantage, plus Rondout’s few wins on the season will likely give Liberty’s opponents the edge as the season rapidly nears its conclusion.

This is it. The game that has been shaping up to be the game of the year since the beginning.

Behind Hartman’s prolific running season, the Bears are hungry and looking to avenge last season’s loss to Sullivan West. Tri-Valley was tested on the road against Eldred last week, but knew what they had to do and got it done, defeating the Yellowjackets by more than two scores.

Sullivan West had Livingston Manor/Roscoe last week, and breezed to a 44-0 win over the rebuilding squad. The Bulldogs have had a few close calls, including a goal line stand to defeat Eldred earlier in the year, but both the Bulldogs and the Bears have managed to stay undefeated in the division to this point, each losing just one game this season to playoff hopefuls from the other division. Pawling beat Sullivan West and Spackenkill defeated Tri-Valley.

With their identical records and similar point differentials to boot, expect this game to be an exceptional contest between two great teams. This playoff preview will also separate the top-seeded team from No. 2 in the division, and it will allow both teams to ramp up all that they’ve worked on throughout the season as they prepare for playoffs.

The Panthers picked up where they left last weekend, picking up their second home win to stay undefeated on their home turf for the season.

Their big win over Beacon featured highlight reel plays on offense, defense and special teams as they beat the Bulldogs.

The Dragons are coming into this matchup as the first place team in the division. They are a perfect 3-0 and have outscored division opponents 114-30.

If Monticello can stay hot at home and hand Cornwall their first division loss, they would continue to put together their best football season in their team’s young history.